Have you seen my newest release? 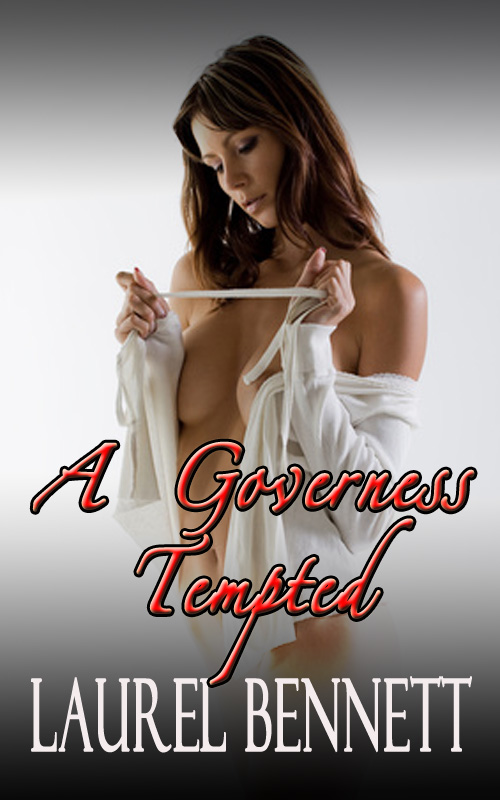 I know you worry when I write about innocent women and incorrigible, handsome rakes who sweep them away in a storm of passion. But I promise no harm comes to any virgins, Regency rakes or nosy neighbors in this short story.

“You do have the look of a man who wants nothing more than to fuck the governess, Ashby.”
Seaton knew enough about their games to know that Ashby would not step out of character, no matter what he said.
He tossed his quill onto a piece of parchment and sat back, rubbing his hand down his face in frustration. He did want to fuck the governess. He wanted that little slip of a woman more than he’d ever wanted anything. He grunted in response to his friend’s comment. He wasn’t capable of making an intelligible response, not while the lemony scent of her still lingered in the air.
“How often does she come to see you?” Mr. Seaton, his lifelong friend, asked casually as he perched a hip on the corner of his desk, a wicked grin tipping the corners of his lips.
“Too often.” Ashby wanted to stand up and pace, but he was certain Seaton would break into a full grin if he noticed the way that the governess tented his breeches.
God, she’d done nothing more than walk into his office to apprise him of his daughters’ lessons for the week. But she’d done so peeking up at him from beneath heavy, dark lashes that lay across her alabaster cheeks like fans when she blinked. She’d done so with her pretty rose-colored lips pursed when she was vexed about a prank his daughters had pulled, which just made him want to kiss her. To see if she would soften.
He groaned aloud and laid his head back in defeat. The little minx had been all he could think about ever since she’d been interviewed. His wife was completely against the hiring of her. Said she was much too comely. But he’d overridden her. There was something about Miss Winter’s innocent gaze that made him want her with an unbridled passion. He wanted to pull down that severe knot of hair so her eyes would soften. He wanted to see if her breasts would fill his hand.
“I saw your wife as I arrived. Is she increasing?” Seaton still grinned at him.
God, he hoped Georgina was increasing. Then he could cease his visits to her bed completely. Three daughters and not a single son, at least not yet. “Not that I’m aware of.”
“Pity that,” Seaton murmured.
“She’s just getting fat,” Ashby said as he tossed his quill down in frustration. He bet there wasn’t a pudgy part of Miss Winters beneath that staid gray dress she wore. He bet she was all lush curves and he wanted to explore them all with his teeth and lips. His wife, on the other hand, had never let him explore a single part of her body. Their interactions occurred in the dark, where he was forced to shove her nightrail up above her knees and do the deed while she lay completely still beneath him. She didn’t move. She didn’t make a sound. Early in their marriage, there had been the sniffle and snort as she cried. Now she just gritted her teeth and bore his attention. “Very fat,” he affirmed.
“I would love to tell you that I pity you, but you have the pretty Miss Winters in your household. My wife would never allow me to hire a governess as pretty as that. I would just like to sit back and look at her.”
Ashby wanted to do more than sit back and look at her. He wanted to taste her. To touch her. To hear her make nonsensical noises in her throat as he brought her pleasure. But that was not to be. He was a married man, an earl, and she was an innocent. He was almost certain of it. God, the thought of taking her innocence made him harden all over again.
“I take that back, Ashby,” Seaton said. “I do pity you. Having to look at her once a week and just think about the way she might taste. It’s enough to drive a man to distraction.”
Distraction was a ridiculous word for what he was feeling.